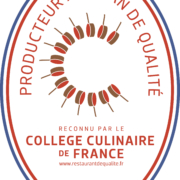 The application of Martine honeys has been validated unanimously by the founding chefs at the Culinary College of France.

Founded by 15 French chefs (including Alain Ducasse, Yannick Alleno and Frederic Anton), the College Culinaire de France is dedicated to promoting the quality of food in France and around the world. It contributes to the influence of the French gastronomic culture and economy. It supports, promotes and develops the heritage and future of traditional culinary heritage. It encourages the exploration and appreciation of all culinary cultures of the world.

The Culinary College of France is the institution of reference of the French gastronomic culture based on the values and the practices of the trade which are derived from it.

This validation places Martine honeys among the best artisans of France.

×
Miel Martine awarded with a special mention at the French Innovation Corner...